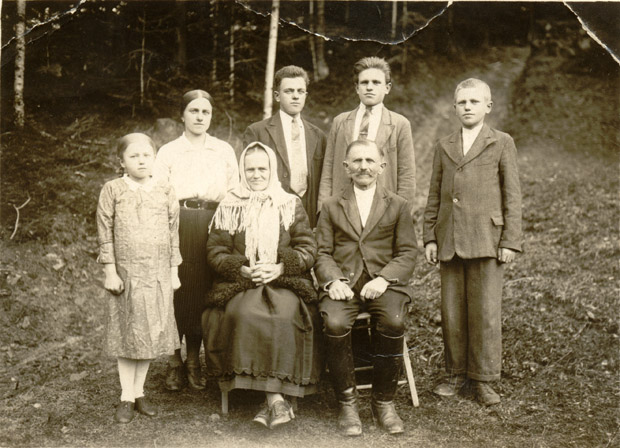 We have recently worked on a case for Harry Kurek. He is one of our clients, was born and live in the USA. Harry Kurek is a member of the Polish Genealogical Society who is actively seeking for his Polish roots.

All his grandparents emigrated from Galicia to States in the early 90’s. Jan Kurek, Harry’s grandfather was born in 1871, in house 23 in Poznachowice Dolne. His grandfather and grandmother were – Andrzej Kurek and Agnieszka Rumińska. Grandfather emigrated to America somewhere between 1909 and 1910. Other grandmother Maria Kurek, nee Kaleta was born in house 44 in Porąbka. She and Jan got married in 1896 and lived in Dąbie. They have several kids including Harry’s Aunt Agnieszka and Stefania who lived their lives in Porąbka. His aunt Agnieszka Kurek got married in 1939 to Aleksander Koza. They had only one child – Ignacy born in 1944.

Harry has reconstructed much about his ancestors and families lived in Galicia. He is very proud of his Polish heritage and the strong and brave members of both his mother’s and father’s families. He also was fortunate to know three of his grandparents whom he respected and loved greatly.

Although Harry has gathered much genealogical information about his family there are still six photographs that remain a mystery.

So far his aunt Agnieszka identified the young woman as Czesława and the children as Jarosława and Bogdan (1).

The man with Czesława was not identified by name but was identified as the husband of Czesława (2).

The man in the photo with the cows was identified as Ludwik and the year was 1957 (3).

Ludwik may be the husband of  Czesława. His aunt Agnieszka is in the picture with the young girl on her First Holy Communion day (4).

Aunt Agnieszka referred to Czesława and the children as her daughter and grand children although Harry’s cousin Igancy does not know of or recognize any of these people in the photos other than his mother. Finally, the mystery is who are these persons and what was the reason for referring to them as daughter and godchildren by aunt Agnieszka.

Below you can find pictures that are still not completely identified. In conclusion, if anyone recognizes anyone in these photos or has knowledge of Harry’s ancestors please contact YRiP with your information.