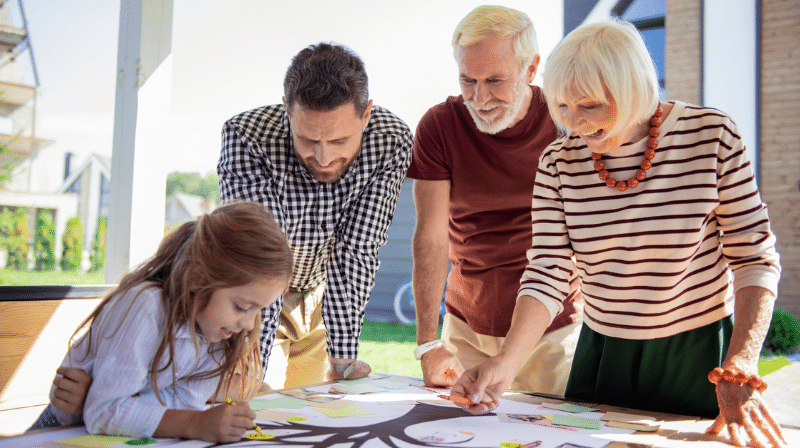 Genealogy (from the Greek γενεά, genos – “family” and λόγος, logos – “word”, “knowledge”) is “one of the supporting sciences of history, concerned with the study of family ties between people on the basis of the kinship and affinity occurring between them.” It therefore examines legal as well as biological-legal aspects, and focuses its particular attention on families and lineages, their origins, history, and the mutual family relationships and fates of individual family members. In order to establish the necessary facts as a basis for research, it is first necessary to access special sources, such as in particular, birth records. This is essential in order to be able later to prepare genealogical tables to show the relations between family members (e.g. family tree). Such research may also appear in the form of a physical publication (e.g. book, script, article) and more recently, increasingly in electronic form.

The new possibilities in genealogy

Thanks to the new possibilities provided by electronics, the number of people individually seeking information about their ancestors has increased significantly. Only with the help of archives, which allow you to access your data via the Internet, you can discover many interesting facts about your own roots and origins. Due to the high demand of searching for one’s identity and the growing number of people willing to find this type of information, this field is growing in popularity. In many places in the world, it is even considered a separate scientific discipline, for example in the West, in Anglo-Saxon countries. In such a reality, at universities and colleges, seminars and various courses are conducted on it.

When we speak of genealogy we cannot omit the mention of the great man Włodzimierz Dworzaczek. An important Polish historian, heraldist and genealogist, who in 1943, during spring and summer, was an employee of Warsaw’s Central Archives of Historical Records. After the end of World War II, he began working at the Adam Mickiewicz University in Poznań and in later years eventually received the title of full professor. One of the many merits that are attributed to him is the publication in 1959 of the first textbook in Polish literature called “Genealogy”. It was eventually divided into two parts, the first of which is a textbook filled with factual content, while the second part consists of 183 tables that are supposed to present the genealogy of ruling families in Poland and neighboring countries as well as of the most important magnate families. However, many of his works cannot even be listed or found because he was the type of author who wrote not only for immediate publication.

Genealogy- science, passion, and  an idea to spend free time

Over time, the subject matter covered by the field of genealogy, as well as the framework of its usefulness, has changed dramatically and broadened its horizons. At one time it was largely intended as a means of reinforcing social divisions, or even as an indisputable confirmation of them. Currently, it is an indispensable tool in the work done by historians – it provides an opportunity to determine in depth the relationship of one person to another, with the help of relevant historical sources. This science has turned into a passion and an idea for many people to spend their free time, at home with family or alone. Aside from the main general meaning of the term genealogy, it means something completely different to everyone, each person can go through their own individual adventure during such research.