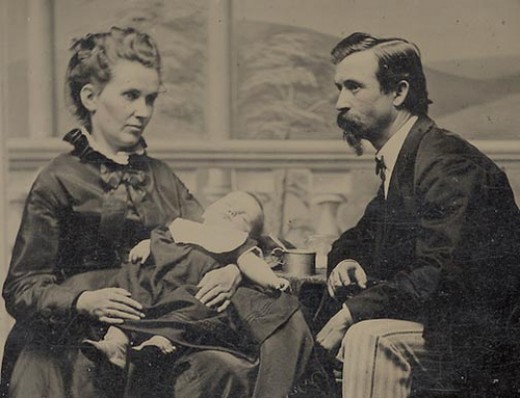 At the very beginning, the question is what is Post Mortem photography? It is a picture showing a person who is dead in such a way that on the photograph it looks like a living one. The deceased was often dressed in an elegant clothes such as a suit, placed on a frame in a sitting position, usually with some object in hand such as a book or a bouquet of flowers.

The second half of the nineteenth and the first half of the twentieth century is the time when Post Mortem photographs are most popular. In those days taking an ordinary photo was expensive and not everyone could afford to take it. One has to remember that at that time people, especially children, often died, so death was a common event for people living in those times. An interesting phenomenon from those times is how the families of the deceased preserved the corpses of their relatives. We can imagine many situations in which there is no photographer in the place where the deceased lived. Until his arrival, families or special establishments had to take care of the proper conservation of the corpse so that it would be suitable for placing it on the photograph. The preservation of the corpse was facilitated by keeping it in ice, as well as by the cold air and generally winter climate.

Nowadays, many people are concerned about watching Post Mortem photographs. Nothing strange about it has changed a bit since the 20th century when it comes to the frequency of dying. In those days people did not live as long as today, often the flu could kill a small town, children often died shortly after birth, the view of death by those people was very different from today’s views on the subject. A picture of how the attitude of contemporary people to death has changed is the funerals. Today, when someone close to us is dying, we rather do not feel like watching his dead body or even being in one room with him. A completely opposite situation took place in the 20th century when, apart from the photographs themselves, people stayed with a deceased family member for a few more moments to say goodbye to him.

Many people believe that photographing the deceased is a lack of respect for them, but it is a mistaken belief, because Post Mortem photographs were used by people to keep those who passed away with them for a longer time and thus give them the due respect. Very often such photographs were worn in different medallions so that people who lost a loved one could always have it with them.

Today, Post Mortem’s photographs are a carrier of important information for all those who seek the genealogy of their family. Often in the search for their ancestors we find out who they were, what they did, but often we do not know what they looked like. This is an advantage because some of us may be able to see our ancestors in a single photo, which, as we know, often took place with a deceased person and thus may fill a gap in their family tree.