Polish Christmas is one of the most festive holiday celebrations in Poland. It plays a major part in Polish culture, tradition and heritage. It was important to our ancestors and now it is evenly important to us.

Polish Christmas traditions related to this beautiful family festival commemorating the birth of Jesus Christ have been observed with reverence for generations. During this special time, every Polish family decorates a Christmas tree, shares a Christmas wafer, sings Christmas carols and exchanges gifts.

On Christmas Eve (pol. wigilia), 24th of December, right after sunset, children look for the first star to appear in the sky. It is a sign that the official Christmas-Eve dinner can be started. The most important moment of the celebration involves sharing the Christmas wafer (pol. opłatek) and exchanging best wishes. This is a sign of reconciliation, love, friendship and peace, but above all of forgiveness.

Only after the wafer is shared, family members can sit at the laid-out table, covered with white tablecloth. Usually, the hostess places hay straws (symbolizing baby Jesus who was lying on the hay straw in the stable) under a table cloth, which are later taken out by people sitting at the table. A long and straight straw bodes a good year without problems or complications. Additional tableware is placed on the table for a stray wanderer or an unexpected guest, who should not be alone on such a special day. An empty plate is also a sign of remembrance for deceased relatives.

See also:
Polish Christmas Eve
supper – one of the healthiest ones in Europe 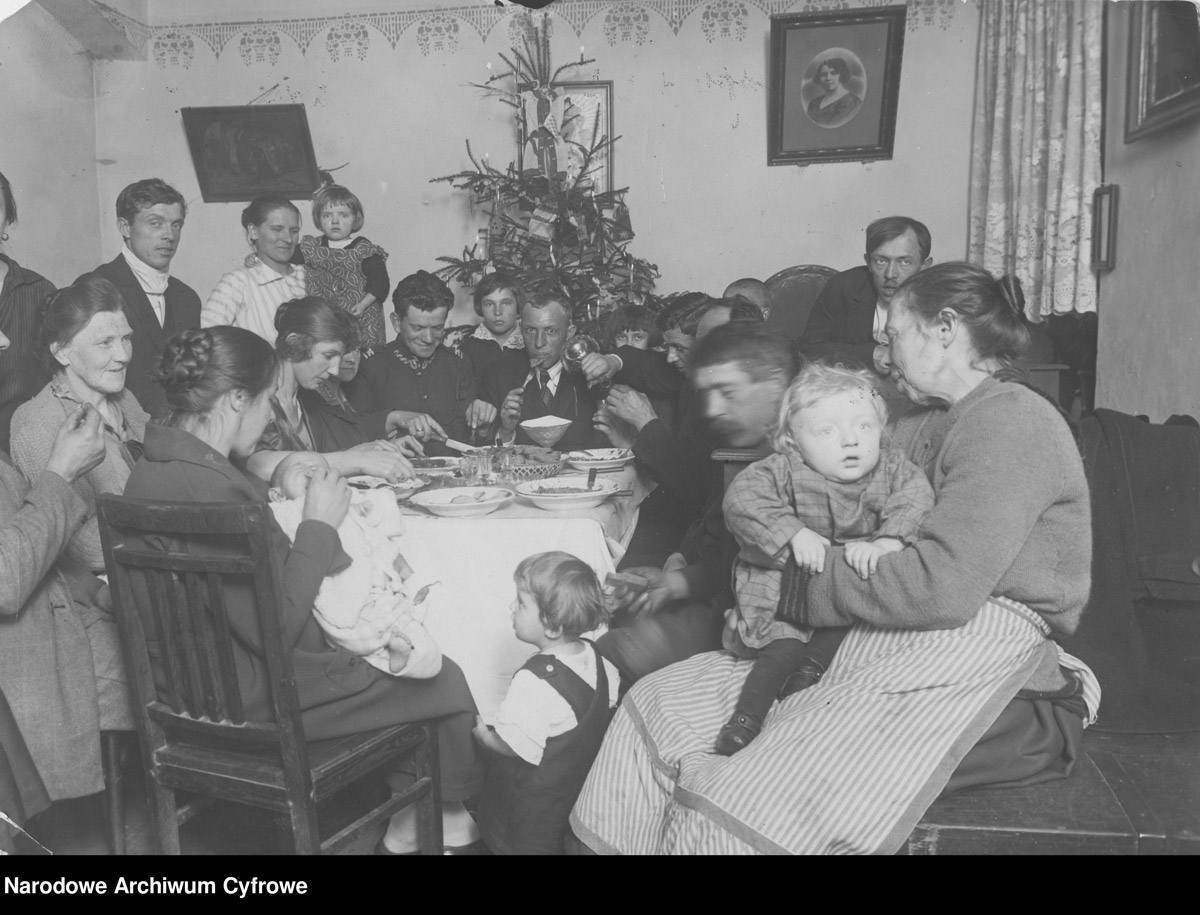 On Christmas Eve, 12 fasting dishes are served, symbolizing 12 months or 12 apostles. Another commonly practiced Polish Christmas custom is to prepare an odd number of dishes. There could be five, seven, ten or even eleven of them. Legend has it that the more varied the food, the greater the prosperity that will befall the participants.

Historical accounts show that back in the day, particularly in the Polish countryside, Christmas Eve dinner, was prepared only from the fruit of earth: agricultural product and fruit of the forest, rivers, ponds and lakes. This way, peasants paid homage to Mother Earth. Meals consisting of fish, considered fasting by the Church, were initially eaten on the Christmas Eve mostly in fishing households and in manors and monasteries, mainly in places with own fish-breeding ponds, which were quite frequent in Poland.
With time, carp (pol. karp) has become the most important fish meal on Christmas Eve in Poland. On Christmas Eve, they are usually served fried with grated horseradish or in jelly accompanied with vegetables. Not many people remember that they also used to be served in a grey sauce, called the Polish sauce, cooked on the basis of fish blood and wine.
A native Polish breed, called the Zator carp, has particularly delicate meat. In 2011, the Polish Zator carp received the Protected Designation of Origin status registered by the European Commission. The fish is raised in the Małopolskie Voivodeship, more specifically in three neighboring communes: Zator and Przeciszów in the Oświęcimski Poviat, and Spytkowice in the Wadowicki Poviat.

Apart from carp, the traditional Christmas Eve dinner in Poland has to include borscht soup (pol. barszcz) made of beetroot or mushrooms with ravioli-type dumplings with mushroom filling, pierogi with cabbage and mushrooms, as well as salads and fish, including herrings prepared in many different ways. Christmas desserts include poppy seed rolls, honey-cakes, and shortcakes with almonds, nuts and raisins, as well as stewed apple, pear and plum compote (pol. kompot z suszu). Kutia (wheat with poppy seeds and honey), in turn, is a relic of old rites in the honor of the deceased. 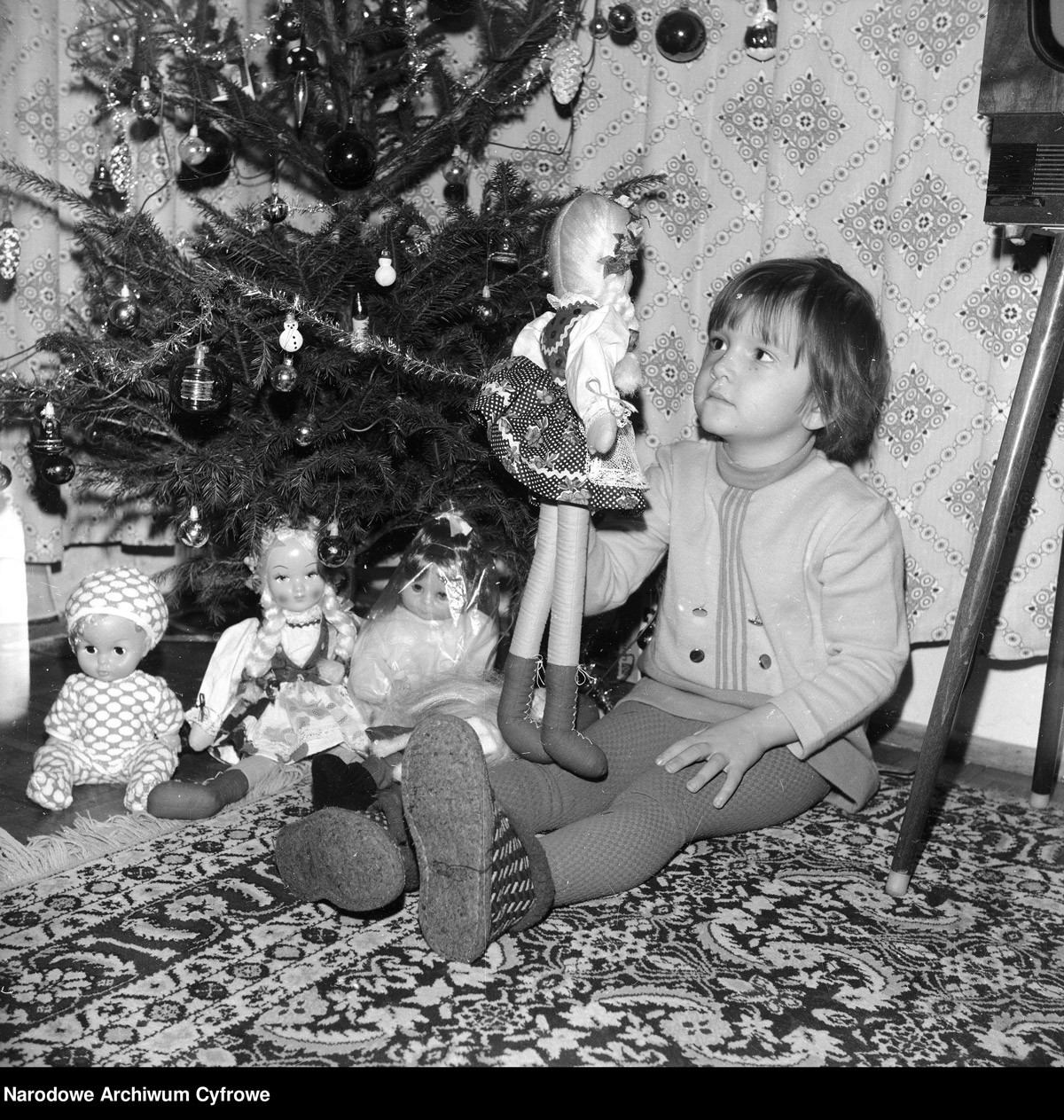 The festive atmosphere would not be complete without a Christmas tree. The tradition of decorating Christmas trees came to Poland from Germany in the 18th century. Before that, people would hang the top of a fir, a pine or a spruce from the roof, and place a sheaf of corn in the corner. The tree meant to protect the house and its inhabitants from evil. The star that is often put at the top symbolizes the Star of Bethlehem. Decorated with trinkets and other ornaments (more and more often a handmade, paper decorations done , the Christmas tree usually stays in the house until Epiphany (6 January).

On Christmas Eve and during the entire Christmas season, Poles sing carols: traditional songs about the birth of Christ. The oldest of them date back to the 15th century (“Zdrów bądź, królu anielski – Be well, king of angels”). The songs have been passed down from generation to generation. The most popular ones, such as ‘Wśród nocnej ciszy’ [‘In the midst of night’s quiet’], ‘Lulajże Jezuniu’ [‘Sleep, Baby Jesus’] or ‘Bóg się rodzi’ [‘God is being born’] originated from the turn of the 18th century and are still sing today.

After the feast, at midnight, according to another important Polish Christmas custom, people go to church for the Midnight Mass (pol. pasterka) commemorating the prayer of shepherds who waited for the birth of Jesus in Bethlehem.
Will you add any of the Polish Christmas traditions to your Holidays this year?