From Słopnice to Brooklyn. How’s Bernie Sanders’ father traveled to the United States

Eighty-year-old Senator Bernie Sanders is the longest-serving independent member of the United States Congress. He sat in the House of Representatives for 16 years, and is currently serving in the Senate for the third time in a row. We know him primarily because he took part in the primary elections of a democratic party twice, applying for the nomination in the race for the presidency of the United States. Unfortunately, he lost the nomination to Hillary Clinton in 2016, and in 2020 he withdrew from the candidacy for Joe Biden, who as a result became the forty-sixth president of the United States. With his many years of social work and political activity, Bernie Sanders has earned recognition around the world, and his photo from the January swearing-in increased this recognition.

Few, however, know that Bernie Sanders, born in Brooklyn in 1941, is the son of a Polish immigrant, Eli Sander, who came to the United States as a teenager over a hundred years ago.

Eliasz or simply Eli Sander (this was the original form of the surname) was a Jew born in 1904 in Słopnice in Małopolska, the son of Leib Sander and Etla Horn / Gutmann. Until the Second World War, the Sander family lived in the house at number 215, where they ran a general store.

The senator’s father was not the only child of Leib and Etla, he had two brothers, Jakub and Chaim, and a sister, Chana. Moreover, after the death of his father, his mother remarried Maurice Schnitzer, with whom she had a son, Abraham. To this day, the marks of his siblings have been preserved in the archives of the primary school in Słopnice.

Source: Student grade cards found by Kinga Urbańska in the Archives of the Primary School in Słopnice.

The fate of the family in Poland

Bernie Sanders’ grandmother, Etla, died on January 12, 1934 at the age of 62. His aunt Chana stayed in Słopnice after her marriage to Reibscheid. She lived with her husband and son Leopold in the family house no. 215. The fate of the brothers remaining in Poland is unknown. Bernie Sanders’ family members are believed to have died at the hands of the Nazis. It is known from the surviving reports of witnesses of the history of and few documents that the Reibsheids and Schnitzers living in Słopnice were probably moved to the ghetto in nearby Limanowa, where they were shot together with other Jewish inhabitants of Słopnice on November 5, 1942.

Today, there are no traces of Jewish inhabitants in Słopnice, but a hundred years ago, about 100 Jews lived there. After the wave of emigration, about 35 remained (out of about 4,000 rural inhabitants). None of the Jews who lived there at the beginning of World War II survived the Holocaust.

Unsuccessful trip to the USA

It can be problematic to trace the stages of the journeys of our ancestors who emigrated to America at the beginning of the last century. There are many errors in the spelling of names and surnames in the documents, but in the case of Eli Sander’s first trip to America, another problem appeared, which, as it turns out, is specific to people of the Mosaic faith migrating from Galicia. On his first and second trips to the United States, Elias was registered as Elias Gutmann, so he used his maternal grandmother’s maiden name. Why it happened this way?

Probably his parents and grandparents entered into only a ritual marriage, which was not recognized by the administrative authorities and required separate registration before a civil registry officer. Children born of such a union are usually registered with the authorities as illegitimate children under their mother’s name.

From documents that have survived to our times, we know that Elias’ mother used several names – there are as many as four on her death certificate. She died as Ettel Schnützer (her last husband’s surname, Maurice) née Gutman, aka Horn, Sander – from the first marriage. All indications are that officially Elias’ mother was the illegitimate daughter of Chaia Gutman, and Elias could have used this surname when registering his arrival in America for the first time.

He made his first mysterious voyage as a 16-year-old boy aboard the Rochambeau ship from the port of Le Havre in France, arriving in New York on August 13, 1920. Although the form filled in by the immigration officer does not say “deported,” Elias probably was not allowed to enter the States United, because less than a year later he tried again.

On June 5, 1921, Eliasz Gitman – 17 years, 5 feet 6 inches (165 cm), light skin, black hair, dark eyes – arrived in New York. He claimed to have never been to the United States before. This time it set sail from Antwerp, Belgium, on board the Lapland liner. In the form, he described his profession as  student, he spoke and wrote in Polish, he was a Hebrew, a Polish citizen.

The fact that it is one and the same person is evidenced by the contact person indicated by him, in addition to the age and description of his appearance. In both the 1920 and 1921 forms, he provided details of his uncle Abraham Louis Horn, and of his mother, Jetti Gutmann / Gitmann. The example of Elias’ trip to America shows that not all documents are accurate. Migrant registration officials made mistakes frequently, and it was difficult to spell names from different languages and alphabets.

Senator Bernie Sanders makes frequent references to his father’s family story. In 2013, he visited his hometown Słopnice. Young Elias’s desire to get to America has another dimension. Thanks to this decision, he saved himself from the tragedy that befell his relatives in Poland. He survived and could bear witness for those who were not so lucky. He has worked hard all his life to support his family. It can be said that it is only his son Bernie who realizes the Americam Dream, which teenage Eli probably dreamed of during his journey across the ocean. 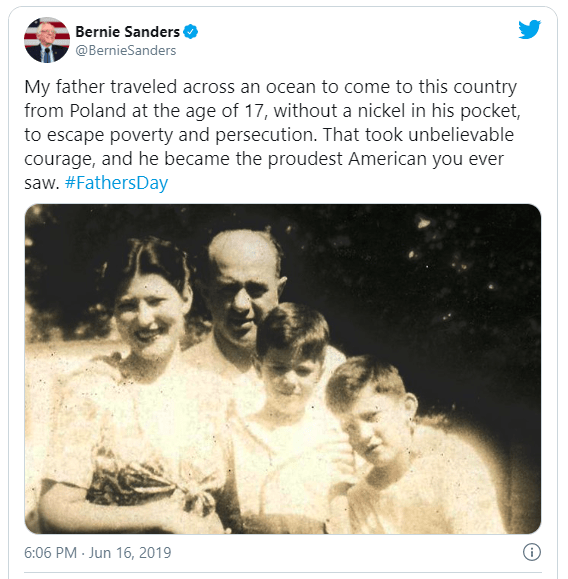 Information about the Sanders family on Geneanet portal, source: https://gw.geneanet.org/tdowling?lang=en&pz=timothy+michael&nz=dowling&p=etla&n=horn