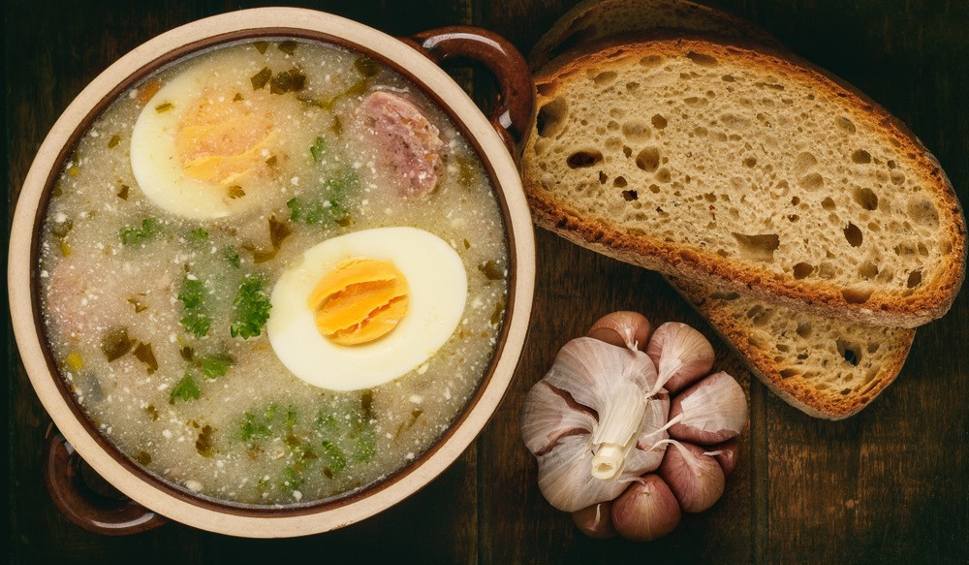 Żurek is one of the best known polish traditional soups, recognized worldwide. Rumor has it that Żur was the very first polish cuisine.

A definietive must – have meal during Easter time in Poland. Depending on the region and local traditions there are various ways to serve Żur which is also known as Żurek or Barszcz Biały (white borsch). In Poland it is sometimes served in an edible bowl made of bread or with boiled potatoes and halved hard-boiled eggs. It is also traditionally eaten during Easter. Although Polish name Żur comes from German word ‘sūr’ (‘sauer’ in modern German) meaning sour, there are 2 legends about how has it all started and who cooked it for the first time. Thus we decided to write these stories in a nutshell for you.

Once upon a time in a small Polish village there was an Innkeeper so mean that he skimped on almost everything, even on his guests. He not only water the beer but also saved up on food by buying very poor ingredients at the worst local market. Even though his food was awful, almost uneatable The Mean Innkeeper had prices so high, hardly anyone from the village could spend time in the tavern. Soon after the bad name of The Mean Innkeeper spread around the surrounding villages, and people started to avoid not only the tavern but whole the village. Countrymen fed up with his rude behaviour decided to teach The Mean Innkeeper a lesson. And so they found the biggest glutton who could eat almost everything, dressed him in expensive clothes and sent to the tavern with a chest full of gold. When The Mean Innkeeper notice the chest he started to serve his wealthy guest by himself. It was then when the glutton revealed him that he heard of his bad reputation and offered him a bet: The Mean Innkeeper was to prepare the worst soup he could and if the glutton would eat it the tavern and the recipe is his, otherwise he would lost all his gold. As The Mean Innkeeper was very greedy he agreed without any hesitation. And so he started to prepare his awful soup: first he put some leaven he has left after bread baking into the pot, then pour some water and put it on the fire. He looked around and found some old sausage, dried mushrooms and smoked bacon from breakfast. Not thinking much he added it to the boiling water. Then to make it look more like soup he threw in some withered vegetables and few cloves of garlic to get rid of the unpleasant smell. Sure of his victory he served the soup to his guest. But to The Mean Innkeeper surprise the glutton not only ate the whole bowl but even asked for another one, and so did other guests enticed by the smell. Unfortunately for The Mean Innkeeper that awful soup turned out to be his best performance ever and so he had to gave away his tavern, the recipe and leave the village forever.

According to this story it was not The Mean Innkeeper who invented Żur but The Poor Old Lady. She had almost nothing to eat and had to prepare dinner for her hard-working husband. The only thing she had was some leaven, so she pour water into the bowl and put it aside. Then she left her house to find some food. After hours spent in the fields she only had two small potatoes and went back home with resignation. To her great surprise, she noticed there was a very pleasant smell wafting in her kitchen. After discovering that the source of this smell was the bowl with leaven and water she decided to boil potatoes with it. She looked around her kitchen and found some smoked bacon and old mushrooms so she added it to the pot. In this way there was tasty and nourishing soup waiting for her husband. Later he praised to his neighbours what a delicious soup his wife prepared for him the other day and they passed this story to others.

And so no matter thanks to The Mean Innkeeper or to The Old Poor Lady Żur is still one of the most popular soups in Poland, recognized as a Polish traditional Easter soup.