Nowadays, more and more people try to find their roots. It is not an easy task. It takes time, a lot of time. If you are looking for your Polish ancestors, it often requires proficiency in Russian, German and Latin. Our profession sometime may resemble work of a detective.

But this job gives you huge satisfaction from finding almost forgotten ancestors and information about them – it highly exceeds dedicated efforts.

During our adventure with genealogy we encountered many very different cases. One of our biggest successes was finding the grave of Aleksander Gliński – soldier of the Polish Army, who died in defense of the Polish Republic in September 1939. 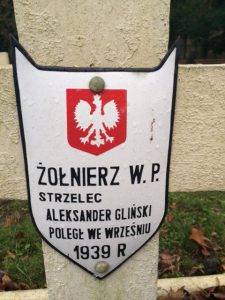 We were contacted by Mr. Wiesław Walaszek, who was looking for the grave of the father of his mother-in-law, Ms. Renata Glińska-Janowitz. Mr. Walaszek gave us information about the place and date of birth, and also date and possible place of death – Gliński was killed in September, in the Warsaw area. It was our first case of this kind. This does not mean, however, that we didn’t accepted this challenge. On contrary – we put all our resources to complete the mission. The search started from looking at the available databases, library catalogs and lists of soldiers who fought in the 1939 Defensive War. In the collection of the Jagiellonian Library we found a very valuable and interesting publication, entitled “Book of buried Polish soldiers, killed in World War II” ““Księga pochowanych żołnierzy polskich poległych w II wojnie światowej”). This voluminous work brought back the memory of Polish soldiers who died, defending our homeland. There we found, among other files, archival materials of the Board of the Polish Red Cross, the Central Military Archives, the former Ministry of Spatial Planning and Council for the Protection of Struggle and Martyrdom Sites.

On these pages we discovered the entry for Aleksander Gliński. Thanks to close cooperation with Mr. Walaszek we were able to confirm that this was a person we were looking for. Our hero was killed September 24th 1939 in Jelonki, Warsaw. He was buried at the Military Cemetery in Stare Babice. Graveyard in this village contains the remains of 340 soldiers, of which only 176 could be identified. This statistic is sad and tragic – a huge part of them were put in nameless graves. 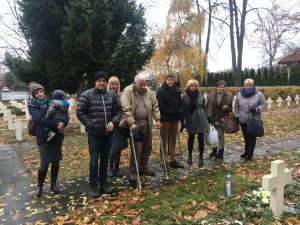 Aleksander Gliński was enlisted as a private in the 360th Infantry Regiment. This unit was hastily formed from volunteers and reservists in September 1939. It contained five battalions and 3515 soldiers. Unfortunately, we couldn’t get to the information, in which battalion fought Gliński.

One of the main objectives of the regiment was to the defend the Warsaw from the west. The first commander was Lt. Col. Jakub Witalis Chmura. However, he was killed on September 12, and in his place was took by Lt. Col. Kazimierz Galiński. Two weeks later, on September 26, heavily injured Galiński died. The last commander of 360th Infantry Regiment was Lt. Col. Tadeusz Władysław Daniec.

It is also worth mentioning that in the ranks of the this unit fought Janusz Kusociński, an outstanding Polish athlete. We can only assume that our hero knew the Olympic gold medalist from Los Angeles.

At the end of our research I decided to find a certificate of baptism of Aleksander Paweł Gliński. He was born on 25th of June 1901 in Krąg – village, situated near Starogard Gdański. His place of birth belongs to the Roman Catholic parish in Kokoszkowy. Our hero was son of Aleksander Gliński and Apolonia Stablewska. His godparents were Franciszek Kończyński and Anna Puff. There is also an information, that he married Anastazja Brieske on 25th of August 1930, in Tuchola.

The whole team of Your Roots In Poland contributed to the fact, that Ms. Renata Glińska-Janowitz, after 76 years of searching, could light a candle at the tomb of her father. We are proud of this success. This is another proof that determination and perseverance in finding allowed us to achieve this objective.