She is a Polish genealogist. At the beginning of her academic career she put her interest in oral history, which lays just a step away from genealogy. She confronts listened stories about Jewish communities in Eastern Europe with archival documents. In Your Roots in Poland since 2018, most often works on Jewish cases and explaining Polish ancestors mysteries from the territory of the former Grand Duchy of Lithuania and Prussia, but she won’t get lost among Christian books from Austrian Empire or while searching for living descendants all over the world. She runs cycles of genealogical workshops and webinars, translates historical and literary texts from Polish, German, Yiddish, Lithuanian, Belarusian and Russian.

She has studied Comparative Literature, Polish Studies and Ethnology and Cultural Anthropology via Inter-Faculty Individual Studies in the Humanities at the Jagiellonian University, but in the meantime she has been realising scholarship programmes in Vilnius, Vienna, Tartu, Tallinn, Berlin, Haifa. She was a speaker at many international scholar conferences. A member of Collegium Invisibile, where she works on psychoanalysis and postwar history of Lithuanian Jewry. After hours a lecturer of Yiddish, German and Polish. In the past she has worked as an editor in academic journals „Polisemia”, „Bez Porównania”, „SkandinaWIEN”.

In her academic works she enters the spirit of the literatures of Baltic borderlands of the second half of 19th and first half of 20th century (in Polish, Yiddish, Hebrew, Lithuanian, Latvian, Estonian, Belarusian, Russian and Afrikaans). The second important field to her is the historiography of the Shoah, she specializes in the history of the subcamps of Auschwitz-Birkenau and the territories of activities of Einsatzgruppen A. She has worked with many Survivors and second generation, provided and translated hours of oral history interviews with the eye-witnesses in Dzukija and Aukstaitija. Her last texts and research focus on the discourse of the collective guilt in Polish and Lithuanian public debate.

She has lost her heart among former East and West Prussia, where she comes back joyfully to visit the archives or at least reunites in a virtual way during genealogical research, looking for the footprints of common Polish-German presence. 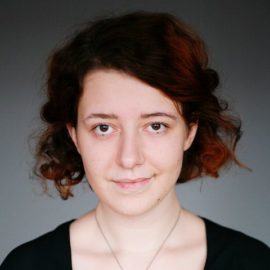