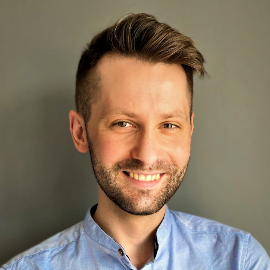 Adrian Jarosz – junior genealogist at Your Roots in Poland. He deals with genealogical searches, obtaining source documents, establishing contact with living relatives, etc. He easily works with materials in Polish, Ukrainian and Belarusian archives. He is also familiar with German, Slovak, Hungarian and American archives.

He obtained the professional title of engineer at the Cracow University of Technology in the field of Technical Physics, specializing in computer modeling. Currently, he is a student of Anthropology and Ethnology at the Jagiellonian University. In his master’s thesis, he describes the problem of identity and memory on the example of people dealing with genealogy, both amateurs and professionals.

He began his adventure with genealogy in 2002, when forgotten names and surnames of ancestors emerged from the first collected interviews. The question was “who was here before?”. With this question he went to the priest, then to the archives, and now he is looking for answers in DNA tests. Thanks to this experience, he tries to help clients answer the question “who were my ancestors?”. He also dealt with the digitization and indexation of record books, analysis of old maps in terms of determining the place where ancestral farms stood.

He is particularly interested in the history of Orava and the fate of the Orava highlanders. The specificity of the region and numerous migrations allowed for the collection of valuable experience while working with documentation in Slovak, Hungarian, German and Latin. He studies the fate of emigrants who left Orava towards the southern part of the Austro-Hungarian Empire in the 19th century, the United States at the turn of the 19th and 20th centuries, and other places in the world. Thanks to his work, he helped many people to determine the place of birth of “great-grandparents”. As a curiosity, it is worth adding that before World War I, Oravians left the Austro-Hungarian Empire (and before 1867 the Kingdom of Hungary) as Slovaks and Poles.

After hours he plays the violin, accordion, and double bass. You can hear it from time to time, here and there. Like history and genealogy, he is particularly interested in Orava music and its place on the ethnographic map among the Carpathian and Balkan folklore. It was the Balkan roots that came with the Wallachians that prompted in-depth analyzes of the DNA test results. Analyzing the genetic code, looking for traces of ancestors in DNA and discovering the next cousin around the world is an immersive adventure.